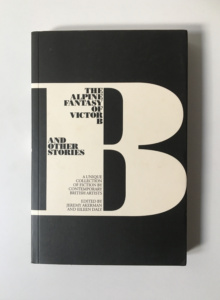 Towards the Heavenly Void

Text commissioned for The Alpine Fantasy of Victor B and Other Stories artist’s short story collection published by Serpent’s Tail. The narrator, singer Dermot Bucknall, describes how  a writer’s ghost appears before him in a dressing room mirror. The ghost is the ‘original’ comedian Les Dawson, who claims he gave away his identity to the other famous Les Dawson, who we all know and love. His monologue, peppered with old jokes, explains his motives, and how he eventually dies in the attempt to join Che Guevara as a guerrilla in the South American jungles.

The story was inspired by the true story of Les Dawson’s journey to Paris in the early 1950’s to become a writer, the failure of the attempt, and Dawson’s subsequent mythologizing of this period. It is a story of artistic and political ambition arising out of desperate conditions, an ambition to transcend circumstances, that is both doomed and comically fulfilled at one and the same time.