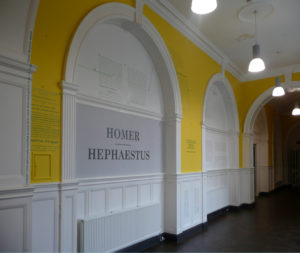 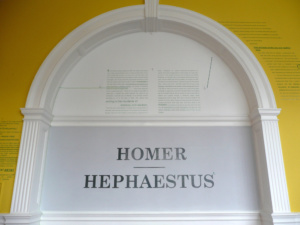 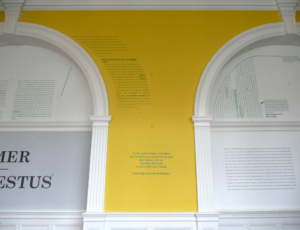 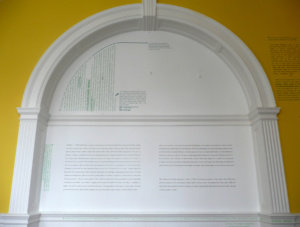 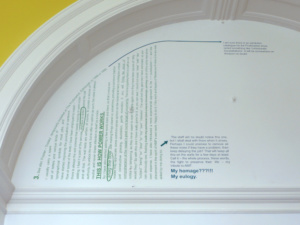 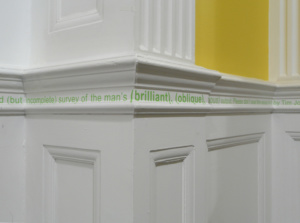 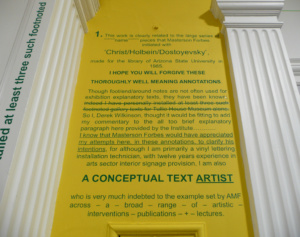 The Storey G2website. 2013 article about the work. 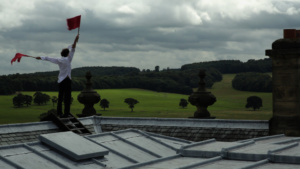 You can also watch the piece on the FVU watch player.

The nineteenth century British trade union banners recreated in these paintings are stripped of the original names of the unions, mottoes or images. Only the skeleton of their decorative embellishments remains, often with a simple text describing what may have been pictured on them. Instead of presenting literal depictions of historical events, the paintings aim to create a tension between that implied history and its non–representation, its mere framing, opening a space for a viewer to think about those moments, and the difficulties of their representation, for themselves.

“Rooney revives the almost lost tradition of the trade union banner in paintings full of echoes from working class history.” Jonathan Jones (The Guardian). 9/6/1999 preview of the works.

“The potential for social and political change that the exponents of an artistic avant-garde and the banner makers hoped, in their own ways, to achieve are played out in these works. Rooney’s work takes away the fragments of the past, the pieces of Victorian decoration, the tasteless kitsch of the fair ground and the political slogans that for some were an anathema to Art, to open up the false divisions and allow a space for wider interpretations, not driven by a self serving hierarchy.” Pam Meecham (Museum of Labour History exhibition brochure). April 1999 essay about the works.

The Newsroom (The Northern Standard, Ireland). 7/11/1996 article about the works.