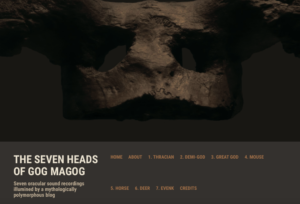 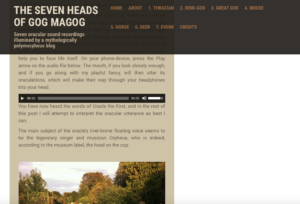 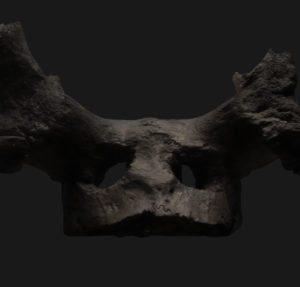 The Seven Heads of Gog Magog

From 14th October to 4th November 2014, every Tuesday and Friday, self-styled poly-myth-storian EF Bausor uploaded seven mysterious recorded songs to a website. She named these recordings The Seven Oracles of Gog Magog. She also attempted to elucidate each of these songs in an accompanying blog post.

Bausor writes: “I call these tracks ‘oracles’ because they are premonitory or prophetic emanations that seem to have issued from – or through – seven objects, or ‘Seven Heads’, from museums in Cambridge. I call these objects The Seven Heads of Gog Magog. This may all seem a bit of a fanciful notion, but in the course of my blog I have attempted to comprehend what this idea could mean, primarily by engaging with the words of the oracles themselves. I request that you visit Cambridge and the seven museum objects in order to play each recording in their presence, new-creating the moment of the oracle’s original ‘utterance’. Each of my seven mythologically polymorphous blog posts does not reveal the ‘true’ meaning of each recording, rather it attempts to speculate on the nature of it’s enigma. With the help of my ‘beast-mates’ and the stories of Jane Ellen Harrison, Orpheus, Syd Barrett, Rat and Mole, TC Lethbridge and others, the blog as a whole explores the possibility of a return to a golden age of the ‘real gods’, and to life itself. The seven heads have spoken.” Thanks to EF Bausor, Kerry Devine, Spike T Smith, University of Cambridge Museums and Metal.

Image of Starr Carr Head Dress reproduced by permission of the University of Cambridge Museum of Archaeology and Anthropology, 1953.61 B

“Even without the connective tissue of the blog, it’s a great spin; a truly unique work.” Ed Pinsent (The Sound Projector blog). 7/5/2020 review of the work.

“What a peculiar and engaging little 25 minutes this provides… A nice thought provoking tidbit for the avant-minded.” Strigiform Witness (Rate Your Music website). 29/7/2018 review of the work.

“…it is rare indeed to be presented with something as singular and remarkable as The Seven Oracles Of Gog Magog… The recordings here are hallucinatory and compelling pieces.” Jared Dix (Echoes and Dust blog). 13/07/2018 review of the work.

“Another excellent release from the Owd Scrat label. Some fine female vocals intermingled with experimental music and some speech and one or twenty strong and atmospheric melodies.” Gavin Hellyer (Bandcampwebsite). June 2018 review of the work.

“The Seven Oracles of Gog Magog… purports to be the music of a tomb dwelling seventy year old autodidact called Emma Florence Bausor. I’m not sure how much of this is true from Owd Scrat Records, but I like this track called Two…” Stuart Maconie, Stuart Maconie’s Freak Zone (BBC 6 Music). 10/6/2018 radio broadcast of the work.