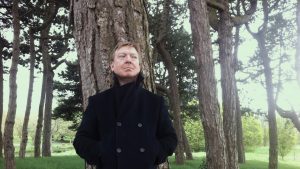 Paul Rooney is an artist/musician based in Liverpool, who makes music with words “investigating the intersections of music, myth, memory and place” (The Wire magazine). His installations, videos and records explore the unpredictable narratives that haunt everyday objects or places, and the comically unreliable nature of narrative itself.

Works by Rooney were included in the British Council show Electric Earth: Film and Video from Britain, which toured to eighteen international venues from 2003 to 2006; British Art Show 6, which toured around the UK in 2005-2006; and Running Time: Artist Films in Scotland 1960 to Now, shown at the Scottish National Gallery of Modern Art in 2009. He has shown work at Tate Britain; The Arnolfini; BALTIC; Whitechapel Gallery; and ICA; and has exhibited internationally at places such as Museo Tamayo Arte Contemporáneo (Mexico City); Museo Nacional Centro de Arte Reina Sofía (Madrid) and at the Shanghai Biennial.

Paul Rooney’s record releases have been broadcast by presenters as diverse as John Peel (Radio 1), Ian McMillan (Radio 3), Huw Stephens (Radio 1), Verity Sharp (Radio 3) and Stuart Maconie (6 Music). From 1998 to 2000 he released three lo-fi experimental pop albums as ‘Rooney’, recording a session for John Peel’s show in 1999. His next public release, under his own full name, the 2007 post-punk dub 12″ single Lucy Over Lancashire, was described by BBC 6 Music’s Marc Riley as a “masterpiece”.

Rooney has been commissioned by organisations such as Film and Video Umbrella, The Drawing Room or Tate Liverpool, and has undertaken artist residencies at Tate Liverpool; DCA, Dundee; Proyecto Batiscafo, Cuba; and University of Oxford/Victorian College of the Arts, Melbourne. Other projects include solo exhibitions at Site Gallery, Sheffield (with Susan Philipsz), Matt’s Gallery, London and the Liverpool Biennial; a site-specific sound ‘lecture’ in Leeds for Sound and Music and MAAP; and a museum object divination website for University of Cambridge Museums. He was the winner of the second Northern Art Prize in 2008, and two of his installations were purchased for the Arts Council Collection in 2015.

His post-punk experimental folk album Futile Exorcise was released in 2017 and was followed by Surface Industries I in 2021, the first of two ambient skewed-pop albums focussing on the service industries. Both came out on Owd Scrat Records, a current ongoing label project by Rooney and other collaborators in which all of the label artists are fictional personae with often longstanding and interrelated backstories (or semi-fictional backstories in the case of one of the artists, Rooney himself, who is often implicated within his own fictions).